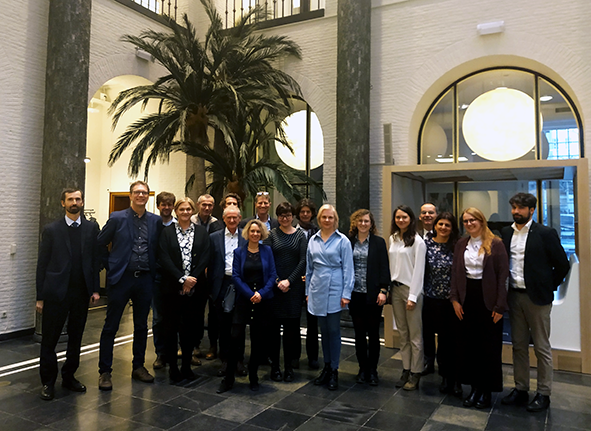 On March 2-3, 2020, the consortium gathered in Amsterdam for a kick-off meeting to formally start the EuSocialCit project.

The meeting included two full days of presentations and lively discussions focusing on the various parts and objectives of the project with the aim to agree on a common way forward on substantive issues, as well as on organizational and managerial ones.

Principle investigator Prof Frank Vandenbroucke (UvA) welcomed twenty researchers (of which two online) from nine different institutions from all over Europe: Lithuania, Poland, Italy, Spain, Denmark, Germany, Belgium and The Netherlands. On behalf of the European Commission, Francisco de la Torre Francia (DG RTD) joined the meeting, while Dr Andreas Obermayer-Mureşan was there in his role as Project Officer from the Research Executive Agency.

On the first day, much attention was devoted to the project’s overall conceptual apparatus. That is, the EuSocialCit project adopts a resource-based, multi-level concept of social rights, which it claim is vital for understanding the past and (potential) future role of the EPSR in enhancing the social dimension of EU citizenship. It is therefore considered of key importance to adopt this concept as a framework for all analyses  of how European citizens have been exercising their social rights with respect to the project’s three foci areas of empowerment of citizens (e.g. education and activation), fair working conditions and social inclusion. This session of the meeting was kick-started with a presentation by Prof Maurizio Ferrera (UNIMI), followed by presentations of the leaders of each of the three thematic work packages, respectively Dr Cinzia Alcidi (CEPS, WP3 on empowerment), Prof Caroline de la Porte (CBS, WP4 on fair working conditions) and Prof Bea Cantillon (UA, WP5 on social inclusion).

Prof Brian Burgoon (UvA) then presented, on behalf of the WP6-team which he is leading, how the public opinion research on European social citizenship is going to be organized and how he and his team anticipate the quantitative mapping of social rights. This session was followed by a plenary discussion on addressing the project’s focus on the gender dimension of European social rights and social citizenship.

On the second day, the kick-off meeting focused primarily on organizational and managerial issues such as quality control procedures, ethics, and data management, while Sara Baiocco presented on behalf of CEPS the key features of EuSocialCit’s dissemination plan.