The skill challenges posed by Covid-19: is Europe ready to invest in its labour force? (BLOG) 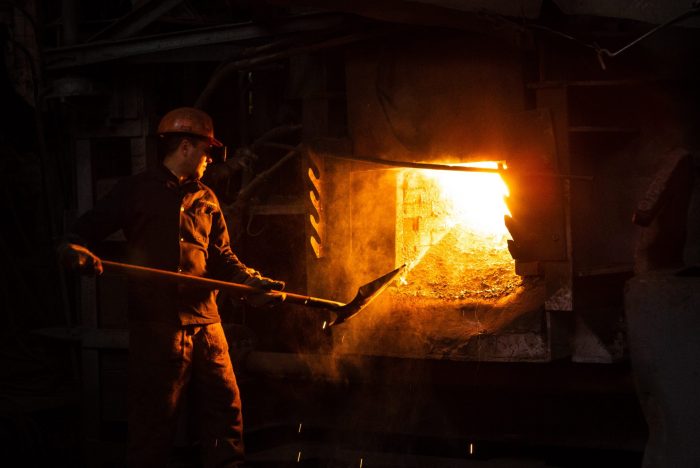 The impacts of lockdowns in response to the Covid-19 outbreak have been asymmetric across different economic sectors, depending on the degree of social contact needed to perform the activity but also on the use of technology.[1] The measures being taken to contain the spread of the pandemic are accelerating ongoing transformations in the economy and in labour markets, driven by digitalisation. ‘Pandemic-proof’ digital technologies are poised to take over certain jobs faster and more easily than had previously been the case.[2] Workers laid off in shrinking sectors or whose jobs are threatened by technological advancement and by the pandemic require new opportunities to succeed. Failure to manage transitions towards new sectors or new occupations effectively may lead to a significant increase in long-term unemployment, with broader social consequences.

It is against this background that up- and re-skilling policies are part of the flagship areas recommended by the Commission for national investments and reforms under the Recovery and Resilience Facility (RRF). These policies recognise the growing need to adapt and develop (up-skill) workers’ existing skill-sets to meet new challenges, as well as the need to retrain (re-skill) workers for jobs in rising sectors of the economy. More generally, labour market policies play a decisive role in mitigating the threat of human capital deterioration and can avoid frictional unemployment, resulting from sectoral restructuring of the economy, turning into long-term unemployment. National governments are responsible for such policies and their choices will affect employment outcomes.

EU member states differ greatly with respect to expenditure on their labour market policies. In 2018, total expenditure varied between 0.1 and 2.8% of Gross Domestic Product (GDP) within the EU27 (Figure 1). 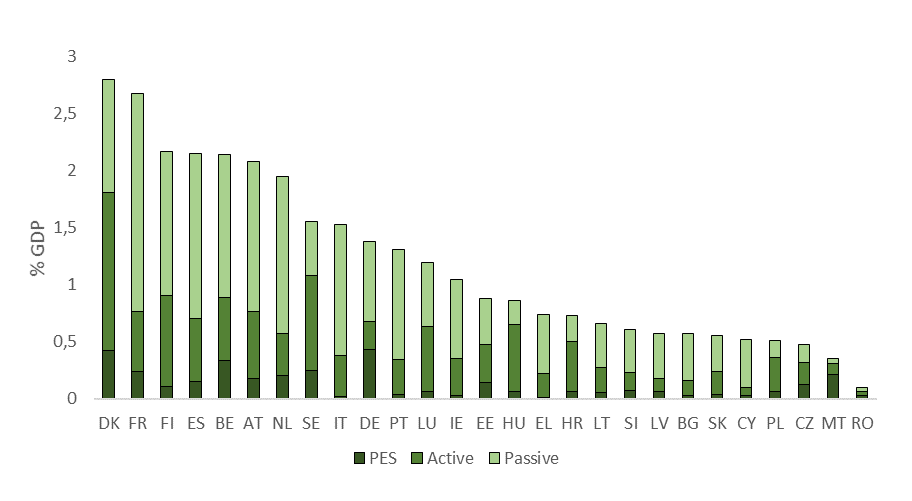 Within ALMPs, the share of public investment in training, which provides a rough measure of investment in up- and re-skilling, varies dramatically across the EU27 (Figure 2). 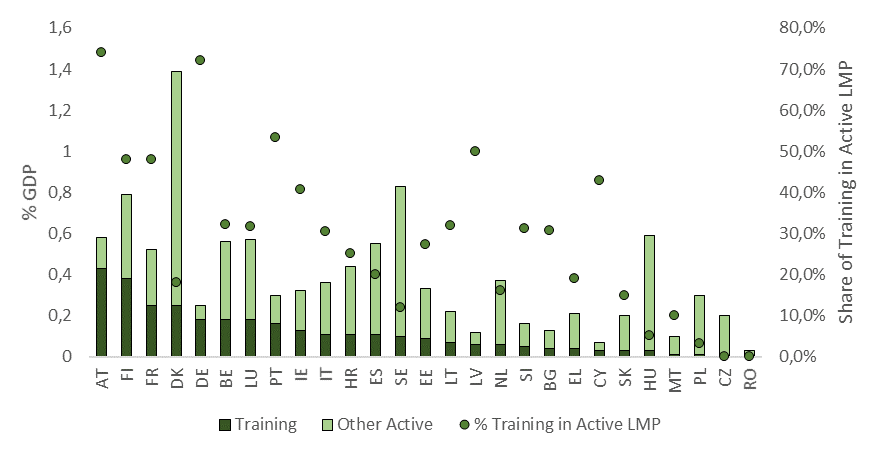 Note: training is category 2 of expenditure in LMP and Other Active covers categories 3 to 7.

Expenditure in training ranges from 3% to 74% of the total expenditure on ALMPs, corresponding respectively to between 0.01% and 0.43% of GDP. Yet, no clear pattern can be determined. Some countries that invest little in ALMPs overall concurrently invest a small percentage in training, while others dedicate a higher percentage to training.

Expenditure on ALMPs does not occur in a vacuum. For instance, engagement in training and jobs programmes is influenced by the quality of the services that provide support, guidance and mentoring to beneficiaries of ALMPs. Expenditure in labour market services (i.e. Public Employment Services – PES, see Figure 1) is therefore part of the capacity to implement ALMPs and to engage beneficiaries in up- and re-skilling effectively. Countries such as Germany, Belgium, France and the Netherlands that spend a limited share of GDP on ALMPs devote in reality a substantial part to PES. This may be characteristic of an efficient ecosystem in which workers receive financial support for activation and the PES are well-equipped to guide and support them in the transition. In contrast, Italy and Greece exhibit a relatively low share of GDP investment in ALMPs as well as very low spending on PES. This may denote low capacity to use the (already scarce) resources effectively, because the PES system is not developed enough to reach out to and follow workers in need of support.

Confronted with the Covid-19 pandemic, a key question is how member states can put in place adequate policies for up- and re-skilling. The EU is trying to offer a framework and resources for them. The European Skills Agenda can play an important role in setting benchmarks and guiding and assisting member states. Next Generation EU funds can support member states by committing unprecedented levels of spending.

Yet in order to be successful, the EU policy framework and EU financial resources could be explicitly intertwined. This can be done by linking mid-term progress on the European Skills Agenda targets for participation in learning[3] to progressive disbursement of funds during the recovery. Tracking progress on targets for up- and re-skilling could push member states to tailor their policies and investment of EU funds where progress is slower and more needed. Moreover, qualitative and quantitative indicators on labour market services (e.g. PES) could provide additional measures for monitoring progress of policies. This information is in part already considered under the European Semester, though its measurement is not completely systematised and homogenised across countries.

As we stand today, the final choice on how to spend the EU RRF funds lies with national governments. Whether member states will opt to invest further in up- and re-skilling as part of a more developed social investment approach is still unclear. The draft National Recovery and Resilience Plans prepared by Italy and France to access EU funds offer insights into current trends.

Of a total provisional list of 390 projects (equivalent to €454 billion in spending) proposed by Italy, two are with its ALMP national agency (ANPAL) and amount to €15.4 billion (0.86% of GDP). This figure is more than double the country’s current annual expenditure in total ALMPs, i.e. 0.36% of GDP. Of the €15.4 billion allocated, €11.2 billion would be earmarked for a Plan for workers’ competences development, to support labour market transitions, with a focus on reinforcing PES.[4] The latter component, in particular, signals a significant shift in policy and is intended to reinforce the ecosystem for stronger ALMPs.

In France, €14.3 billion are planned to be dedicated to policy measures for skills development and activation of the most vulnerable categories of workers, including youth and those with disabilities. An additional €1.9 billion is proposed for spending on professional training reinforcing pre-existing programmes.[5] These measures collectively amount to 0.67% of France’s GDP, a significant increase on the current total expenditure on ALMPs at 0.52% of GDP.

The examples of Italy and France point to an increased awareness of the skill challenges posed by the Covid-19 pandemic and the importance of active labour market policies to address its long-term impacts. Plans must however be followed by action. The effective implementation of the measures will be the real test of any new approach to social investment. Countries which have limited experience or few structures in place will face bigger practical challenges and be slower to deliver. In this respect, it will be important not only to monitor the implementation and quality of policies but, crucially, labour market outcomes.

[1] Accommodation and food services, retail trade, sport, fitness and recreation, and personal services are the sectors most subject to restrictive measures and those experiencing the highest losses. See Barbieri et al., 2020, similar studies for the US and for France, and estimations in this article of the Economist.

[3] Objectives are set for 2025: 50% of adults and 30% of low-qualified adults in learning during the last 12 months, 20% of unemployed adults with a recent learning experience.

[4] In Italian: Piano per le nuove competenze. Rilancio delle politiche attive a sostegno delle transizioni occupazionali [Plan for new skills. Relaunch of active policies in support of employment transitions]. In addition, approximately €9 billion is allocated for other projects assigned to different ministries but dedicated to up- and re-skilling.

[5] Such as France competence and Pôle emploi. Grouped under the ‘Cohesion’ priority focusing on investment in human capital to achieve social inclusion.